Two Days in Murshidabad: A Small Town with Big History

Murshidabad is a district town in West Bengal, India. It is situated on the banks of the river Bhagirathi (distributary of The Ganges). It was once the capital of Bengal, often called last capital of independent Bengal (comprising today’s West Bengal, Bihar, Odisha and part of Bangladesh). It is named after Murshid Quli Khan, the Dewan (and later Nawab) of Bengal appointed by Mughal Empire. Murshidabad became the capital in 1717 and in 1773 the British shifted the capital to Calcutta.


THE HISTORICAL IMPORTANCE OF MURSHIDABAD
The name of the place Murshidabad is inextricably related to the Battle of Plassey (Palashi in Bengali, year 1757), a battle that was never fought (!) but had colossal consequences in the history of India. Sounds strange, but true. How could a side having 50,000 soldiers lose against a side having only 3,000? It’s by same technique that the British applied in most of the battles conquering India – treachery. “…won it by promoting treason and forgery” as described by Jawaharlal Nehru in The Discovery of India. Then why this Battle is so important? It’s important because it was the first. Once they (The British) won it here against Siraj-ud-Daulah, Nawab of Bengal, in the year 1757, they kept doing so for the next 100 years one after one…in Buxar, against Tipu Sultan in Mysore, against Marathas in the series of Anglo-Maratha wars, during siege of Jhansi and so on. They conquered all the local powers and formed the formidable British empire in India. The Battle of Plassey was the first, which showed them the way and that’s why it’s a very important turning point in Indian History (considered as a very important milestone similar to 1192, 1526, 1857 and 1947). We also calculate the duration of British rule in India as 200 years approximately (1757-1947) from this point.

“The Battle of Plassey is often called a battle that was never fought! The battle, however, had colossal consequences in the history of India”


LOOKING THROUGH THE PAGES OF HISTORY - THE BATTLE OF PLASSEY (1757)
I am trying to jot down the historical events in the following sections for the history lovers like me. Others will find it a bit lengthy and may skip...


The Background: That time the capital of Bengal was Murshidabad and the British (East India Company) was centred in Calcutta. Siraj-ud-Daulah earlier attacked and captured Fort William, the British Fort at Calcutta during June 1756, because of a number of disputes with East India Company. These were (1) not paying tax to the nawab, (2) British interference in the Nawab's court, and their support for one of his aunts, Ghaseti Begum, (3) additional fortifications of Fort William without the consent of the Nawab, and (4) favouring Hindu Marwari merchants such as Jagat Sheth. Siraj won this battle very easily and captured Fort William. During this an incident took place, known as the Black Hole of Calcutta. Siraj placed 146 British prisoners into a room measuring 18x15 feet for the entire night. Only 23 survived till morning (the fact is widely disputed, but often sought as a justification for the Battle of Plassey the very next year).
As a result of the defeat Colonel Robert Clive and Admiral Charles Watson were sent to Calcutta by Presidency of Fort St. George, Madras. They recaptured Calcutta on Jan 2, 1757 and treaty of Alinagar was signed. Clive obviously was a very ambitious general and was planning to topple Siraj and capture Bengal permanently. He started negotiating with all the people unhappy with Siraj. Siraj-ud-Daulah was nominated as the Nawab of Bengal by his grandfather (maternal) Alivardi Khan and in April 1756 he ascended the throne on premature death of Alivardi. Alivardi had two daughters and no son. Alivardi's eldest daughter, Ghaseti Begum, wanted another nephew, Shawkat Jang, to be installed as Nawab. Further, Siraj, who was young, immature and arrogant quickly made a number of enemies in his own court. The most dangerous was Mir Jafar, commander-in-chief of the army, businessman Amirchand (who had suffered due siege of Calcutta) and merchant Jagatseth. Clive took no time in locating these people and brought them to the same table. Conspiracy started. On June 5, 1757, a written agreement was signed between the East India Company (represented by Clive), and Mir Jafar, ensuring that Mir Jafar would be appointed Nawab of Bengal, once Siraj-ud-Daulah was removed.
The Battle: The Battle took place on 23 Jun 1757 at Plassey, approximately 40 kms from Murshidabad, the capital of Siraj. The British army was vastly outnumbered, consisting of 3,000 Europeans plus native Indians and a small number of guns. The Nawab had an army of 50,000 with heavy artillery support. It started around 7 a.m. in the morning. As agreed with Clive during the conspiracy, Mir Jafar kept on standing with the main chunk of Siraj’s army throughout the entire battle. Even after repeated summons from Siraj he did not join the war. Siraj along with his two loyal commanders Mir Madan and Mohan Lal fought bravely and would have still won if two things had not have happened. Firstly, around 11 a.m. Mir Madan was hit by a Cannon Ball. Secondly, during the noon, there were heavy showers. The British covered their cannons and muskets for protection from the rain, whereas the Nawab’s army did not. Siraj could not stand against all these odds and by 5 p.m. the British won the battle.


The Aftermath: Siraj flew away from battle field trying to reach Murshidabad and then towards Patna through river way. He was caught by Mir Jafar’s people, kept arrested and was subsequently killed in Jul 1757. Mir Jafar was made the Titular Nawab of Bengal as tax-payer to East India Company. Ghaseti was imprisoned in Dhaka and later drowned in river (some believe it was done by Mir Jafar). Clive became Governor of Bengal. Clive collected (or looted) huge amount of wealth through Mir Jafar for East India Company as well as himself (somewhere around 3 million pounds in those days!). For Bengal (and for India) it was the start of Colonial British Rule and economic drainage for the next 200 years.

﻿
HOW TO REACH MURSHIDABAD

Murshidabad is accessible from Kolkata by road and by train. Distance between Kolkata to Murshidabad is around 225 kms by road and 193 kms by train. You can hire a cab for entire trip from Kolkata. The best is to go by train which takes around 3.5 hours. It was a long weekend. On the Saturday morning, we took the Hazarduari Express (13113 Up). It starts from Kolkata Station in the morning at 6.50 a.m. reaching Berhampur Court Station (you can drop there or at next station Murshidabad) by 11 a.m. While coming back (13114 Down) it arrives at Murshidabad around 4.45 p.m. reaching Kolkata by 9.30 p.m. We came back on Monday. Other trains are Bhagirathi Express, Lalgola Express and Lalgola Passenger.

The above 5 can be complete in 3-4 hours as they are within/ in and around the same Complex, with Hazarduari being the main attraction. People who want to take good pictures of Hazarduari may visit in the afternoon. We reached Berhampur (nearest big town and headquarter of Murshidabad district - 10 kms from Murshidabad) by 11 a.m., checked in at Hotel at Berhampur around 12 noon, had our lunch and started towards the Hazarduari around 2.30 p.m. By 7 p.m. we could complete all the above and returned back to Hotel.


We saw the remaining places throughout the next day hiring a car.

Battle ground of Plassey: If you have more time, you can make a separate trip to the Battle ground of Plassey. Plassey is a village that is 40 kms from Murshidabad (30 Kms from Berhampur). You can hire a cab and visit. There is a rail station also – Plassey. It will take 3-4 hours for this tour, and normally people avoid this because there are only two things to see - the battle ground and a small monument.

Following places are worth visiting in Berhampur:

Murshidabad Silk Sarees are a very popular variety of sarees. With its origin in Murshidabad, these sarees are famous for their intricate designs and pattern works.

Being a small town, Murshidabad does not have big luxury hotels. There are few good options at a reasonable price range of Rs 1,500 to 2,500. There are lodges and other small hotels at low prices (Rs 1000 or less). Hotel Sagnik is a good hotel and close to Hazarduari and other tourist places. If you are ready to stay in Berhampur, then options increase, but not that much. Hotel The Fame, Roopkatha, Hotel Sunshine etc. are good options. We stayed at Hotel The Fame, which is very close to Berhampur Court Station. The price ranges from Rs 1500 to 3000 for all these.


REFERENCES (FOR HISTORICAL INFORMATION)
1. The Battle of Plassey 1757: The Victory That Won an Empire, Stuart Reid
2. Encyclopaedia (https://www.encyclopedia.com/history/)

Photographs, unless otherwise credited, are self captured. 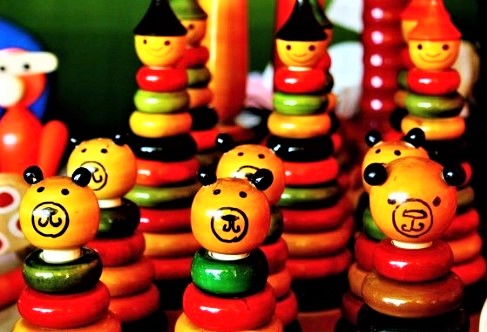 Truly speaking, I never heard of Channapatna before our trip to Mysore last year. We entered our room at Hotel Grand Mercure Mysuru around 2 pm. After getting fresh, we just sat on the couches to fix our sightseeing plan, when I noticed some small and colourful toys on a shelf. Those were kept for sale with price tags attached. I asked the waiter who came to deliver our room-service. He replied “Sir, these are famous toys made in a nearby small village called Channapatna”. By the time I finished extracting some more information from the waiter, my wife googled “Channapatna”, added the place to our sightseeing list and included Channapatna Toys in our shopping list. Knowing that it comes in between Mysore and Bangalore, we kept it for the last day while returning to Bangalore Airport.
Channapatna is a village in Karnataka roughly 60 kms from Bengaluru. It is famous all over the world for traditional hand-made wooden toys and called Gombegala Ooru or Toy-town of Karnataka. Government of …